Includes 26 glossy bird stickers of varying sizes (about 3 to 5 inches tall), a list of each bird, plus 32 additional stickers of clouds, stars, and more. The arrangement is fully customizable and can be applied to any smooth surface.

Ken Done: Art Design Life documents Done's expansive art and design practice over four decades and provides a fascinating insight into the artist and his oeuvre. The book features both early and lesser-known works, as well as the iconic paintings of Sydney Harbour, the Outback and the reef. It opens an extensive archive, providing readers in-depth access to the catalogue of fashion and homewares, and the designs that came to define an era.   ...Show more For a long time, Roman art was somewhat overshadowed by the art of ancient Greece. It was only in about 1900 that a search began for ancient Roman art and architecture. The foundations of Roman imagery were laid in the early days of the Empire under Emperor Augustus. The imperial court and the imperial family were role models for artistic style, taste and fashion - trendsetters, so to speak, which imperial society was obliged to follow. It was at court that the "new" took shape, pieced together from the vocabulary of Greek originals, copies and imitations as well as new creations, but fulfilling entirely new functions and expressing new meanings. The portrait of the ruler and the so-called state reliefs, which enhanced and embroidered real events, by depicting gods for example, had a particular influence in the shaping of the imagery. Using classical stylistic means, Roman art was able to fulfill all the desires and ideas of its patrons for more than two centuries. Featured works include: Augustus of Primaporta; Gemma Augustea; Lycurgus beaker; funerary relief of the Roman couple Publius Aiedius and Publia Aiedia; Constantine I in a helmet with the christogram; the portrait of a man, the so-called Brutus; equestrian statue of Marcus Aurelius; colossal portrait of Emperor Constantine I; group statue of the Emperors Diocletian, Maximian, Galerius and Constantine I, the "tetrarch group"; personifications of Macedonia and Persia. Each book in TASCHEN's "Basic Genre" series features: a detailed introduction with approximately 35 photographs, plus a timeline of the most important events (political, cultural, scientific, etc.) that took place during the time period; and a selection of the most important works of the epoch; each is presented on a 2-page spread with a full-page image and, on the facing page, a description/interpretation of the work and brief biography of the artist as well as additional information such as a reference work, portrait of the artist, and/or citations ...Show more

The Mirror and the Palette by Jennifer Higgie

Her story weaves in and out of time and place. She's Frida Kahlo, Loïs Mailou Jones and Amrita Sher-Gil en route to Mexico City, Paris or Bombay. She's Suzanne Valadon and Gwen John, craving city lights, the sea and solitude; she's Artemisia Gentileschi striding through the streets of Naples and Paula M odersohn-Becker in Worpswede. She's haunting museums in her paint-stained dress, scrutinising how El Greco or Titian or Van Dyck or Cézanne solved the problems that she too is facing. She's railing against her corsets, her chaperones, her husband and her brothers; she's hammering on doors, dreaming in her bedroom, working day and night in her studio. Despite the immense hurdles that have been placed in her way, she sits at her easel, picks up a mirror and paints a self-portrait because, as a subject, she is always available. In The Mirror and the Palette, Jennifer Higgie introduces us to a cross-section of women artists who embody the fact that there is more than one way to understand our planet, more than one way to live in it and more than one way to make art about it. Spanning 500 years, biography and cultural history intertwine in a narrative packed with tales of rebellion, adventure, revolution, travel and tragedy enacted by women who turned their back on convention and lived lives of great resilience, creativity and bravery. ...Show more 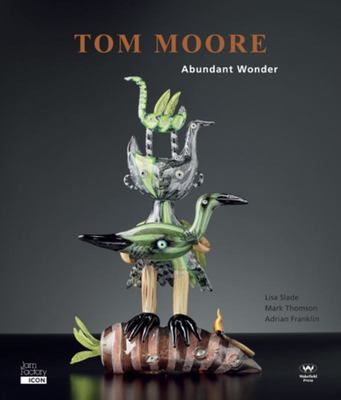 Tom Moore is one of Australia’s leading glass artists. Over his career he has carved out a singular voice within Australian glass art making. His engaging, sophisticated and technically challenging hybridised animal/plant sculptures – and the fantastical worlds they inhabit – are embedded in the history of glassmaking and scientific discovery. His artworks are disarmingly playful in their use of narrative to critique the pressing social and environmental concerns of our contemporary epoch. ...Show more

Artists: Their Lives and Works by Dk; Andrew Graham-Dixon (Foreword by)

A stunning exploration of over 80 famous artists and their fascinating lives, from Giotto to the present day. Artists- Their Lives and Works tells the inspiring stories behind the world's most famous masterpieces and their creators, including their influences, development, friendships, loves, and rival ries. Discover the often tumultuous lives of iconic artists including Raphael, Hogarth, van Gogh, O'Keeffe, Magritte, Kahlo, Warhol, and Kiefer. Uncover the unconventional tales of the artists' lives, including Holbein's matchmaking portraits for Henry VIII, Caravaggio's thuggish reactions to a badly-cooked artichoke, and the many romantic affairs of Picasso. Lavishly illustrated biographies for every artist reveal these visionaries at work in their studios, as well as the unique techniques, artworks, and personalities that made them into legends. Artists- Their Lives and Worksis the ideal gift for art lovers old and young, and a uniquely fascinating look at the lives of these creators. ...Show more Discover the life and work of Frida Kahlo in this introduction to the iconic Mexican artist. Although her body of work is relatively small, Frida Kahlo has inspired adoration and admiration that few other artists have attained. This accessible and elegant book offers full page reproductions of a select ion of her works, allowing for a broad appreciation of Kahlo's use of color, composition, and texture. The biographical text informs readers of her early career, when a bus accident left her bedridden and plagued by pain, but also afforded her the chance to discover herself through painting. It follows her life, her personal relationships, and her years in America. Eckhard Hollmann explores the many themes and images of Kahlo's work, from physical and emotional pain, to Mexican and indigenous folklore, to the flora and fauna of her beloved home. Never shying away from expressing her deepest fears and desires, championing the downtrodden with dignity and passion, Frida Kahlo remains an inspiration to any artist aiming to be true to herself while struggling against personal and political limitation. ...Show more Renaissance art history is traditionally identified with Italian centers of production, and Florence in particular. Instead, this book explores the dynamic interchange between European artistic centers and artists and the trade in works of art. It also considers the impact of differing locations on art and artists and some of the economic, political, and cultural factors crucial to the emergence of an artistic center.During c.1420-1520, no city or court could succeed in isolation and so artists operated within a network of interests and local and international identities. The case studies presented in this book portray the Renaissance as an exciting international phenomenon, with cities and courts inextricably bound together in a web of economic and political interests. ...Show more The third in our "Bay Art Revival" series, this edition of Russell Drysdale has been fully revised to integrate the paintings into the body of the text and includes a new introduction by author Lou Klepac, written to put Drysdale's iconic paintings into a contemporary context. This book traces the caree r of the unusual and remarkably gifted Drysdale, discussing both the sources of his inspiration and the scope of his achievement. It features more than 150 colour plates that illustrate the work of this popular and significant Australian artist. ...Show more "The most revolutionary discovery in the entire history of Van Gogh's oeuvre. Not one drawing; not ten, not fifty, but sixty-five drawings." Ronald Pickvance, from the ForewordLate in life, during his time living in Provence, Vincent van Gogh kept a sketchbook within a humble account ledger given to him by Joseph and Marie Ginoux, the owners of the Cafe de la Gare in Arles. This artifact of incalculable historical and aesthetic value remained hidden for more than one hundred and twenty years. It reappears today as a revelation and an extraordinary treasure.Published in this volume for the first time, Van Gogh's lost sketchbook tells a riveting story. Over two tumultuous years in the artist's life, he drew sixty-five sketches, including landscapes, still lifes, portraits, and a self-portrait, within the ledger. These priceless drawings provide insight into the last years of Van Gogh's life, just before his fatal stay in Auvers-sur-Oise, and a new understanding of his most famous paintings, such as The Yellow House, The Night Cafe, and The Starry Night.With meticulous analysis of the sketchbook and the historical record, art historian Bogomila Welsh-Ovcharov discusses each drawing in terms of Van Gogh's career as a whole, and in particular during his time in Arles and Saint-Remy-de-Provence between February 1888 and May 1890. This groundbreaking book includes facsimile reproductions of all the sketches and is richly illustrated with dozens of drawings, photographs, and paintings that situate the sketchbook in the context of Van Gogh's life's work and the history of art. The result of a remarkable discovery, Vincent van Gogh: The Lost Arles Sketchbook offers fresh insight into the life and work of one of the world's most beloved artists. ...Show more Antiques - The History of an Idea by Leon Rosenstein

The notion of retrieving a bit of the past-by owning a material piece of it-has always appealed to humans. Often our most prized possessions are those that have had a long history before they came into our hands. Part of the pleasure we gain from the encounter with antiques stems from the palpable age a nd the assumed (sometimes imaginary) cultural resonances of the particular object. But precisely what is it about these objects that creates this attraction? What common characteristics do they share and why and how do these traits affect us as they do?In Antiques: The History of an Idea, Leon Rosenstein, a distinguished philosopher who has also been an antiques dealer for more than twenty years, offers a sweeping and lively account of the origin and development of the antique as both a cultural concept and an aesthetic category. He shows that the appeal of antiques is multifaceted: it concerns their value as commodities, their age and historical and cultural associations, their uniqueness, their sensuous and tactile values, their beauty. Exploring how the idea of antiques evolved over time, Rosenstein chronicles the history of antique collecting and connoisseurship. He describes changing conceptions of the past in different epochs as evidenced by preservations, restorations, and renascences; examines shifting attitudes toward foreign cultures as revealed in stylistic borrowings and the importation of artifacts; and investigates varying understandings of and meanings assigned to their traits and functions as historical objects.While relying on the past for his evidence, Rosenstein approaches antiques from an entirely original perspective, setting history within a philosophical framework. He begins by providing a working definition of antiques that distinguishes them from other artifacts in general and, more distinctly, both from works of fine art and from the collectible detritus of popular culture. He then establishes a novel set of criteria for determining when an artifact is an antique: ten traits that an object must possess in order to elicit the aesthetic response that is unique to antiques. Concluding with a provocative discussion of the relation between antiques and civilization, this engaging and thought-provoking book helps explain the enduring appeal of owning a piece of the past.--Peter Lamarque, University of York "Journal of the History of Philosophy" ...Show more